The History of the Hundertwasser House

In a letter dated November 30, 1977 to the incumbent mayor of Vienna, Leopold Gratz, the federal chancellor at the time, Bruno Kreisky, suggested that Hundertwasser be given the opportunity to realize his ideas in the field of architecture by allowing him to build a housing project 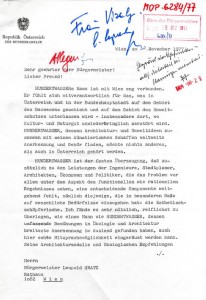 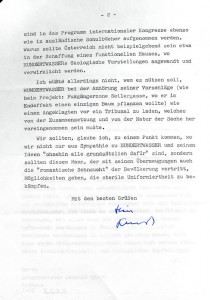 page 2 of the letter from chancellor Kreisky to mayor Gratz, 1977

Leopold Gratz, in a letter of December 15, 1977, invited Hundertwasser to create an apartment building according to his own specifications. 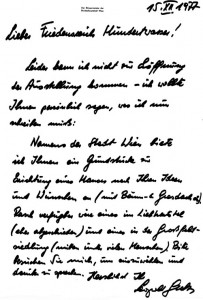 Letter by mayor Gratz to Hundertwasser, 1977

The search for a suitable building plot took several years. Because Hundertwasser was not an architect he asked the City of Vienna to provide a professional architect willing to transpose his concepts into architectural drawings. To this end, architect Josef Krawina was placed at his disposal. 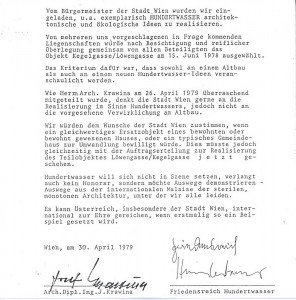 Hundertwasser envisioned a “House for Human Beings and Trees,“ as described years earlier in his text “Forestation of the City.“ As his model of the “Terrace House” for Eurovision showed, he had already conceptualized this house.

Hundertwasser succeeded in convincing the City of Vienna of the validity of his concept of a forested roof terrace house.
Krawina was removed from the project and architect Peter Pelikan, an employee of the Magistratsabteilung 19 [Magistrate Department 19], took over the planning. Architect Pelikan became Hundertwasser’s long-term partner, working with him on numerous other building projects.

The Hundertwasser House was completed in 1983-1985 under Mayor Helmut Zilk. The foundation stone was laid on August 16, 1983, and on February 17, 1986, the house was presented to its inhabitants. Hundertwasser was on the construction site every day for a year. 70,000 people visited the house on the open day. Since its construction the house has been reviewed by the international press and visited by millions of people. The house consists of a brick construction. The flats have various ground plans. There are one-storey and two-storey flats. Many apartments have protruding balconies or pergolas and loggias. 900 tons of soil were used for the afforestation of 14 large and as many small green spaces and tree-tenant tubs. A number of the terraces are publicly accessible, others are designated to the flats, and some are reserved for spontaneous vegetation. The grass and forest areas of the house amount to more than 100 per cent of the ground plan. What was taken away from nature by the construction of the building was restored on the roofs. The living, uneven floor in the public areas of the buildings amounts to a rediscovery of human dignity, which was taken from people in an urban development of flat surfaces. The mosaics on the walls, in the stairways and in the corridors were created by the workers along with the tiles in the kitchens and in the bathrooms, which were laid irregularly to avoid the grid system. It is the first house where the window right is granted to the tenant as a part of the lease agreement. With this house Hundertwasser proved that a more human architecture in harmony with nature is possible within the regular construction time, within the financial budget of a public project, and within the current building laws without any special permits.

Category(s): Creation of the House
The Hundertwasserhouse