If a person, weary of civilisation and sullen from rationality, takes off his clothes in his bathroom, he also wants to forget the latent daily discomfort of the straight line and the right angle. But he can’t, because he is once again surrounded by a meticulously precise replica of the grid system: tiles lined up like soldiers, precisely next to one another, precisely beneath one another.

He may have taken off his second skin, his clothing, but he can’t take off the third one, in this case the stereotypical bathroom tiles. The grid system of the tiles surrounding him prevent him from being naked and true, prevent him from finding himself. This is why irregular tiles are so important.

The irregular laying of the tiles goes faster, for the paver doesn’t need to force the tiles into line using level, string lines, a plumb and matches, gripped by mortal fear of being reprimanded or even losing his job if an inspector discovers that a tile is one millimeter out of line. 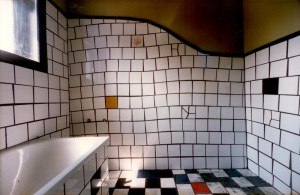 Every bathroom has three tiles which have been shattered by a hammer to create individual patterns, after which the fragments were reglazed so you can’t hurt yourself on the edges. In addition, three or more coloured tiles and a decorative one. The tiles are staggered and shifted sidewards every three to five rows so that they do not lie all in a column. By adding about 7 mm distance in between horizontal rows of tiles in the middle, whole waves of tiles develop without any having to be cut.

The walls and floors of the bathrooms, toilets and kitchens are similarly of irregularly arranged tiles.

All bathrooms, but the toilets, too, have transparent glass bricks for lighting, so you can look out or in.

So the tenant has three options: