The House Should Not Be Measured by Normal Standards

Hundertwasser at the press conference with Mayor Gratz 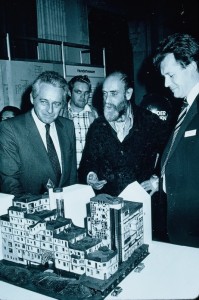 Hundertwasser and Mayor Gratz on the occasion of the presentation of the model. Photo: Bernd Lötsch

So it is imperative that we must break with a whole series of regulations. These regulations, laws and ordinances, created at another time, under different conditions, for the benefit and protection of people, are now, in the light of new requirements and restrictions, directed against the environment and man.

Without an environment which is befitting to man and without peace with nature an existence worthy of man is impossible. These peace negotiations with nature must begin soon or it will be too late.

With authoritarian discipline and self-discipline it might work for a while more or less, and it can be put off.

But then the body and soul will rebel, and we don’t know why.

This house is intended as first approach to a conversation with nature, in which we and nature are equal partners; one may not overpower the other.

Thus, in the ecological house, window right and the tree obligation must be restored.

The WINDOW RIGHT means the freedom for the resident to recreate the prefabricated space of the apartment he is to live in.

This is especially true of the outside wall of his flat. “A person must be allowed to lean out of his window and to paint everything in arm’s reach pink, so people can see from far away, from the street, that there lives a MAN.”

He must also be permitted to let creeping plants grow on the outside walls.

Whether the resident makes use of this window right or not is up to him.

It is then not the government’s, the authorities’ fault if the facades remain rigid in lethally sterile uniformity, and they can wash their hands of it.

Man has three skins: his own, his clothing and his dwelling. All three skins must continually change, be renewed, steadily grow and incessantly change or the organism will die.

When the resident moves in, his creative building activity must begin; it must not be finished when he moves in. In addition, there are unnatural laws strictly forbidding any “unauthorised changes” in the prefabricated building. In this way man is cooped up like an imbecilic slave without rights for whom any creative activity and redesign of HIS OWN living space is made impossible.

The person must move into a criminal building which disregards fundamental laws of nature and man, and this person may not change that of his own accord even though he lives there.

If the architectural skin is forbidden to grow like one’s own, this is a dangerous strangling of life. The pent-up, the inhibited energies of life are then let off in other ways: in aggression and depression, in sickness, unhappiness, divorce, suicide, terrorism, vandalism, mental illness.

TREE OBLIGATION means the restoration of the dialogue with nature.

An everyday life without intimate contact with tree, plants, soil and humus is unworthy of man.

Waiting for vacation, parks, walks in the Vienna Woods is almost even less than the daily obligatory march around the prison courtyard by the inmates.

It is not about putting approved plants in even greater numbers in approved vases, buckets and tubs everywhere, like decorative pieces of furniture. Nor is it about putting in even more lawns maintained by the city. It is about helping nature grow wild in the city, too.

As of now a “non-approved” tree may not grow, even if it doesn’t bother anyone and everybody likes it. Only a freely growing is a true partner and gives us more than we imagine.

The difficulty about building a house worthy of man, and for other people, to boot, is familiar to all architects. The standardised, prefabricated building components make quicker, seemingly cheaper construction possible, but they make creative and natural irregularities impossible. A house worthy of man would have to be like an old farmhouse: all the windows of different size, not in one vanishing line and not at one level, but placed at various, harmoniously organic places.

The storeys of differing heights, the lower ones taller, the upper ones lower.

A few balconies of various kinds and sizes, placed ornamentally and organically.

The outer wall is not perfectly straight and flat like hardboard, but natural, almost imperceptibly humpy, built by hand or with interspersed mosaics and ornaments.

The steps of differing height, width and of varying materials.

Humus toilets and small-scale sewage-treatment facilities with water plants on the site must supplant water closets. For our water closet produces toxins and epidemics, and the waste of water costs us a lot. For our waste must be brought to central facilities by way of long sewer systems in order to be neutralised by some kind of expensive method.

The presorting and re-use of refuse must be a matter of course and something each individual is glad to do.

Material which can decay becomes humus. Paper, glass, metal, plastic, fabrics, wood and dangerous medicines and chemicals are stored and collected separately. (In the meantime, this prediction has become reality.)

As many as possible and even more of these principles of dwelling which are more befitting to man and more responsible should be fulfilled.

Why are ugliness and inhumane building methods allowed?
Why are there permits for such things?

Everywhere you look dreadfulness is congealed to ugliness. And all these buildings are built by qualified architects.

Why aren’t beauty and building methods befitting to man permitted?
It should be the other way round.

Help me to eliminate anonymous perfectionism so a meaningful new era can begin. The house is a co-opertive effort of an architect and a painter, with all the compromises that entails between rationality and feasible irregular romanticism.

That is exactly what makes it interesting.

This solitary example is a long overdue necessity which provides the answer as to whether current architecture can be and look different. The architect is more responsible for the inside, the painter for the outside.

The painter wants creativity in harmony with the laws of nature.

The architect has to make sure the whole thing doesn’t cave in.

The seemingly additional costs do not exist. For they will pay for themselves in better quality of life, a higher quality of dwelling and happiness. Psychological depression and unhappiness cost a lot more money.

Not to mention the costs the general public has to bear for doctors, hospitals, medicine.

If people can live in an environment compatible with them which they can recreate themselves instead of in an anonymous, hostile, aggressive concrete desert, they won’t want to escape at every opportunity, like from a concentration camp, either to the countryside, on holiday, or into substances which make them forget their hostile environment or drown it out.

And that costs a lot of money, too.

There will be more pleasure in life and in working, less aggression and vandalism. That can be reckoned in money, too.

The grass roofing lessens dust, noise, heating costs, produces oxygen, lessens climate extremes. These are cost savings, too. The bottom line is in any case positive.

The house is not an “eco-house”. For it has no solar-energy installations on the roof, no humus toilets, no wind generators. No cattle are grazing on the roof, but it will be possible to harvest some fruit and vegetables on the roof.

It is an unusual house. For it is meant to be an oasis of humanity and nature in the sea of rational buildings, the realisation of the longing of people for romanticism.

Precisely that romanticism which rational architecture negates and attempts to uproot with lethal, sterile zealotry.

Everyone will be glad to return home. For the house sparkles in the sunshine and in the moonlight. It has fountains, and you can sit amidst the trees. And you look at the living walls and recognise the living windows with pleasure, the ones you can reshape yourself, behind which you are at home.

Hundertwasser’s changes and amendments from 1996 are set in italic.