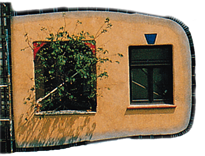 I designed eight window types which are of varying height and width and which are mounted irregularly in the walls, so that one gets the impression as if the windows were dancing of their own free will, without any regard to the rooms inside. All the windows have ceramic covering plates instead of the customary zinc sheeting; they are triple-glazed wooden windows in four colours: red, blue, black and natural-wood colour.

Almost all windows have the typical Viennese T-cross and a cap stone. Many windows have a coloured plaster bordering which blends in with the colour of the outer wall, symbolising window right.

If on a street different buildings with different window types (window races) stand next to one another, nobody says a thing about it, for example an Art nouveau house with Art nouveau windows, a modern building with rectangular windows, a Baroque house with Baroque windows.

But if these three window types are part of one building, this is regarded as an infringement on the racial segregation of windows, as an offence against the laws of window apartheid. Why? Every window has a right to exist in its own right.

Category(s): Hundertwasser on the House
Window Right
Tolerance of Irregularities